1.Remembering the Stolen generation – doing what politicians could not do

After returning from the Melbourne Reconciliation Convention and seeing the lack of response to the Bringing them Home Report (https://humanrights.gov.au/our-work/bringing-them-home-report-1997) as well as hearing the Stories of Stolen Generation people at our 1997 Spirit Event we wrote our own apology. 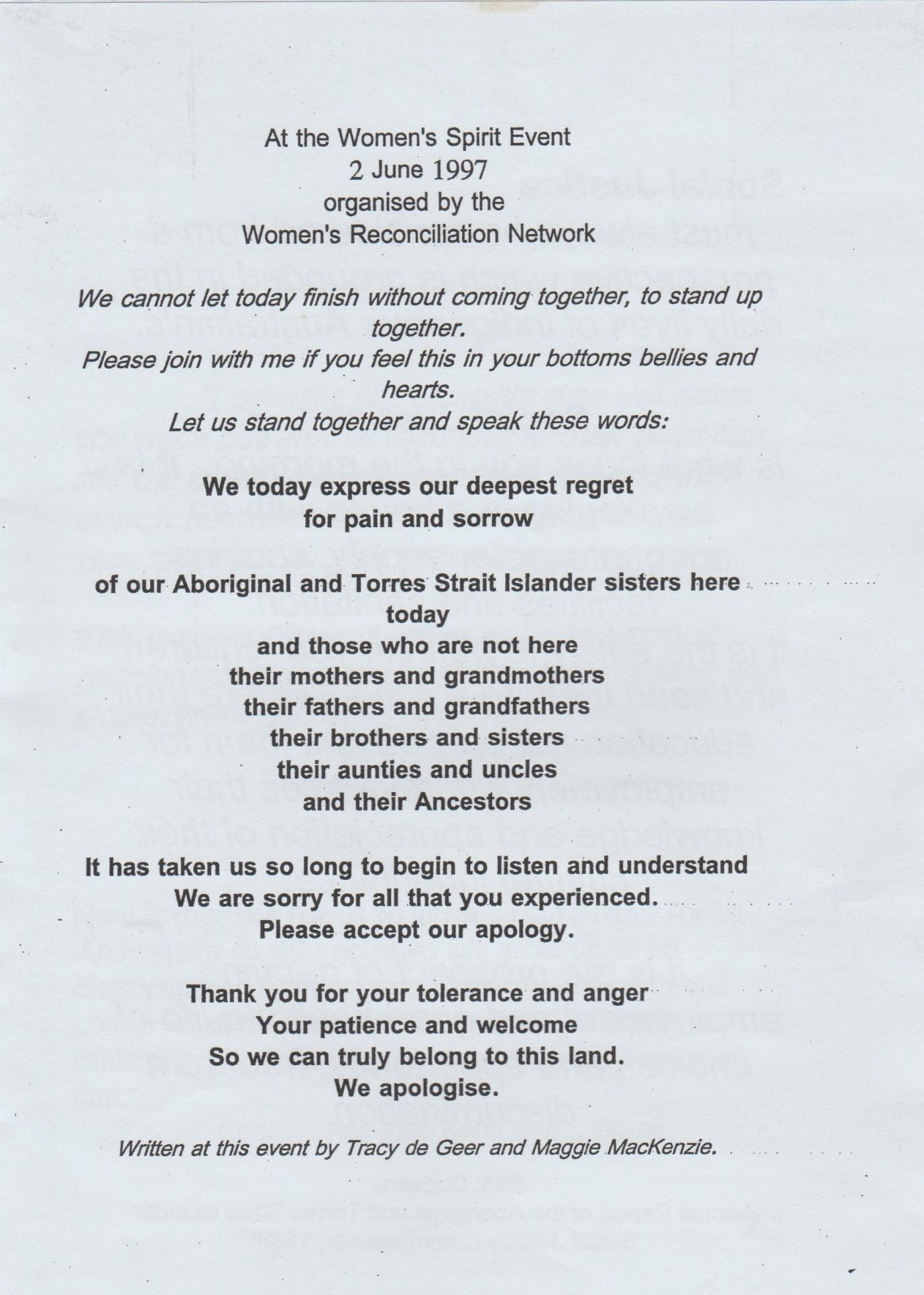 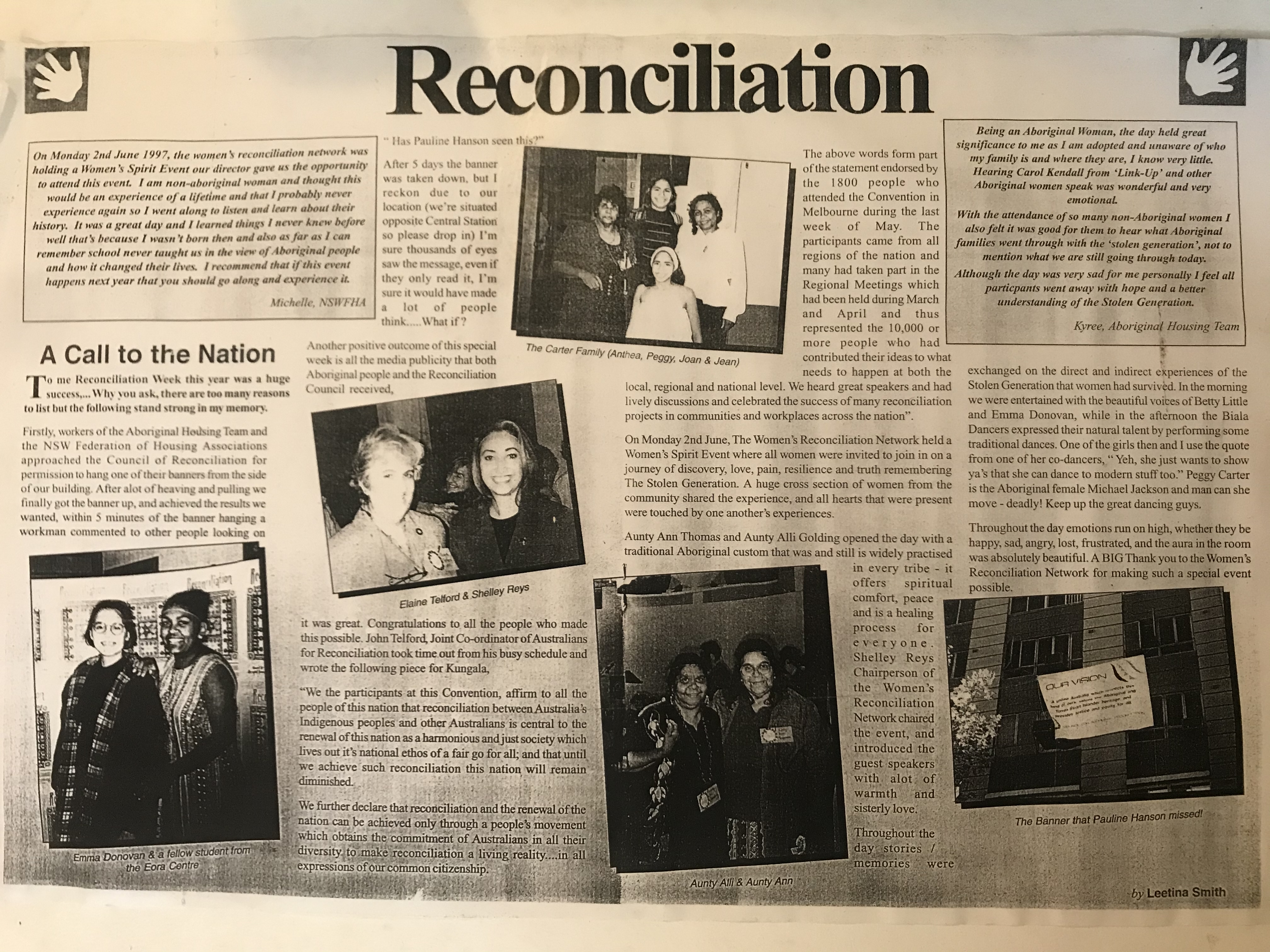 On Monday 2nd June, The Women’s Reconciliation Network held a Women’s Spirit Event where all women were invited to join in on a journey of discovery, love, pain, resilience and truth remembering The Stolen Generation. A huge cross section of women from the community shared the experience, and all hearts that were present were touched by one another’s experiences.

Aunty Ann Thomas and Aunty Alli Golding opened the day with a  traditional Aboriginal custom that was and still is widely practised in every tribe – it  offers spiritual comfort, peace and is a healing process for everyone. Shelley Reys Chairperson of the Women’s Reconciliation Network chaired the event, and introduced the guest speakers with a lot of warmth and sisterly love.Throughout the day stories and memories  were   exchanged on the direct and indirect experiences of the Stolen Generation that women had survived.  In the morning we were entertained with the beautiful voices of Betty Little and Emma Donovan, while in the afternoon the Biala Dancers expressed their natural talent by performing some traditional dances. One of the girls then and I use the quote from one of her co-dancers, “Yeh, she just wants to show ya’s that she can dance to modern stuff too.” Peggy Carter is the Aboriginal female Michael Jackson and man can she move – deadly! Keep up the great dancing guys.

Throughout the day emotions ran high, whether they be happy, sad, angry, lost, frustrated and the aura in the room was absolutely beautiful.

A BIG Thank you to the Women’s Reconciliation Network for making such a special event possible.

One of a number of nationwide Spirit Events held simultaneously around the country. Report from Margaret Oakley.

…The next speaker was a young Aboriginal woman, Heather Lovegrove. I was surprised when she gave her age as 35 years. She was lively, slim, very attractive and a good speaker, though a little awed by the occasion (weren’t we all?). She told how she was fostered out as a tiny baby and then adopted by a white family when she was 18 months old. Although she was 12 before she knew who her real parents were, her adopted family continued to reside in her own town of Murray Bridge. This is where my ears really pricked up for Murray Bridge is not far from where I grew up as a farmer’s daughter, proud of “our land” and the way we made it productive.

Heather spoke of her confusion as a pre-schooler when she started to learn about colour and wondered why her mother’s hand was white and hers was brown. However, her white parents were good to her. They coached the Aboriginal net ball teams and encouraged her to achieve at school and socially. She spoke of her rebellious teen years. She left home and travelled for several years. At age 25, she phoned her adopted parents and apologised for leaving them and for being an ungrateful daughter. They willingly received her apology and in turn apologised to her for not understanding the worth of Aboriginal culture. Heather gave thanks for all those people, black and white, who have nurtured her as she travelled around various cities in Australia. She now holds a responsible position in Adelaide…What did I do? I shed so many tears as these brave women expressed their feelings. Finally, I felt compelled to go forward, take a piece of rosemary from the basket and offer it up with my sorrow for the ignorance of my generation who grew up on the land, never once thinking of the people we had displaced. Heather was younger than my own daughters!!! How could I have grown up in such ignorance?

Candlelight is reflecting through a bowl of water. Surrounding it is a sea of faces, full of anticipation. Women all of different ages and backgrounds. The flickering light seems to flat on the surface of the water, like mist swirling in the mountains which surround us…One woman courageously tells us of her recent major loss and her loneliness. On the train journey to join us today she felt fear and uncertainty. But now she feels warmth and friendship. Her loneliness has abated. We are all moved. We drew our own “Tree of Life” which will be made into a beautiful quilt, a little bit of all of us contained within.

A week later I still feel the glow of the candles we lit. I feel that I have reconnected with others past and present and with my SELF. Reflecting after the event on what delights me, I realise that I omitted two very important things on my tree —Dancing and Drawing. How could I have forgotten these? I have now resolved to reconnect with these activities in order to nourish my inner SELF.